A Christmas Gift to Remember

The day had been an uneventful day for Allison Riggs-Preston; she and Bella had taken the kids to Central Park; they visited the zoo where the kids ooo’ed and aaah’ed over the animals; they hit two different playgrounds with a break in between for lunch. When they returned home, Dane was fresh out of the shower after hitting the gym at Fight Tower and eagerly volunteered to take an afternoon nap with the kids, so Allison decided to take the time to head out to Fight! Tower to look at her Christmas present that her now not so secret santa had gotten for her.

As she walked two blocks from the Swan Imports building to the Tower, she tried to figure out what she was going to do with an Iron Maiden. It really didn’t go with the apartment’s decor. Should she have the kids around an iron maiden? Right now, Luke and Layla were too young to
be able to get hurt, but what about when they are older and figure out how to unlatch it?? Maybe it’s not that big? Maybe they were exaggerating?

As she walked past Nordstrom’s she slowed her pace and did some window shopping, looking at each display in the window until she came to the last. It was a family of mannequins around a fake fireplace, with parents sitting on the couch in matching pajamas while the kids played on the floor with toys surrounded by torn wrapping paper. It made her think of her family, it made her think of this past year and what it almost did to it. She almost lost her family by her actions alone. She agreed to uphold the contract that Joe Montouri came up with putting them together as a tag team aptly named Fatal Attraction. All because she wanted a strap, all because she wanted to somehow… end this vendetta that both families had against each other ever since she could remember. Little did she know she was just a pawn in JMont’s plan to get even with her father. Her choice, it tainted their relationship, it tainted their vows, it was a taint to everything that they were as a couple and as a family. She closed her eyes for a moment and sighed and opened them again. If there was one thing that she could change about this past year, it would be agreeing to do that. She should have done what Dane and her Dad and just about every damned body told her and told Johnny Stylez and OpW fuck you and let the Family’s lawyer’s handle the rest and went about her life.

Shit. She thought. That’s the one thing I’d change about the past decade; hell, my whole damned life.

With one final look at the display, she continued on her journey, crossing 57th Street and then 8th Avenue and made her way down the sidewalk to Fight Tower and opened the main front door of the Hearst building and made her way through the lobby to the main security desk where a couple of the guards were sitting at a bank of monitors.

Afternoon, ARP. One of the guys said as he looked up to see her as she walked up.

How’s it going? The second one added.

Hey guys, going pretty good. You? She leaned on the counter.

Not bad. So, I was told that I have a present waiting for me?

Yeah– He was cut off by a feminine voice with a nordic accent that echoed across the main lobby.

Allison!! Allison turned to find Le’Andra Black and her husband, Xavier, exiting one of the concession stands. Le’ was dressed in a floor length maternity gown that flowed around her with her gait that despite being 45 degrees out was actually a summer dress and in her hand she had a bowl of ice cream that looked like she took a scoop of every topping and put it on top. She stopped and turned to Xavier and quickly said something to him. You could tell by the look on his face and the way he took a deep breath and pressed his lips together he wasn’t too thrilled with her words. But he leaned in, resting on hand on the side of her six month pregnant stomach and gave her a kiss on the cheek; no sooner than his lips left her cheek, she was making her way to Allison. Xavier stood there shaking his head as he watched after her for a moment before he headed to the elevator. Allison couldn’t help but chuckle a little; X had actually met his match. Allie had met and fell in love with him when she was fourteen and just knew she was going to marry him. Boy had she been wrong about that one and it has been amusing watching him dealing with the “right one”. Although Le’Andra and her had gotten off on the wrong foot; they were actually a lot alike. The pregnancy thing, dare Allison say, tamed her some? She silently hoped viking Firstborns couldn’t read minds or some shit. Allison, Xavi’ said you were coming by today. I was hoping to catch you.

Are you trying to catch a cold? Le’Andra looked at her; she didn’t even have to utter the words “Really, Allison, where was I born?” before Allison rerouted. Nevermind, silly question. X didn’t look too happy.

He’s a little upset about “bring your pregnant wife to work” day. She smiled a little. But I really wanted to see the iron maiden before you had it moved.

Which, they moved downstairs, out of the way. One of the guards cut in. Into the Pit.

Shall we? Allison motioned the way to the bank of elevators.

We shall. The two of them wished the two security guards a good day and made their way over to the elevators and Allison pressed the button while Le’Andra took a bite of the ice cream and then wiped her mouth with the napkin she had. Allison looked over at the bowl.

Is there actual ice cream in there? The doors opened and both women stepped inside, Allison allowed Den Gravide to go before her and then followed her in and pressed the button for the Basement.

Don’t judge me. Le’Andra gave her the side eye.

I would never. As the elevator went down, they talked about Le’s pregnancy and Allison’s twins, comparing the two pregnancies but skirting around Le’Andra’s loss of one; despite the family jokes about baby Lex having eaten her brother and the combining of Le’Andra and Xavier’s name to make it look like her name was eating his. Much like Le’ was devouring the ice cream. The elevator came to a stop and the doors slid open and both of them said wow at the same time and stepped out into the FNYC Bareknuckle arena. Standing about 10 feet away from the doors, stood the iron maiden. It was not a scaled model, it was a full scale iron maiden made of iron that looked like it had been in a museum.

That is definitely an iron maiden. Le’Andra remarked as she walked closer to it and ran her hand against the smooth metal. She looked at Allison and then thrust her bowl of ice cream towards her. Hold this, I want to open it and get inside.

Not on my watch, sister. She told her. Are you crazy? She jerked her thumb up to the occhi system. Xavier is probably watching right now just waiting to watch me having to wrestle his pregnant wife away from getting in this thing.

I have to give Anne props. This was a very impressive gift. Le’Andra said and looked at Allison with a smile. We have one at the family’s ancestral home.

Why am I not shocked. She chuckled. I have no idea what to do with this. Where do I put it? Do I donate it to a museum or…?

Or leave here? The questioning look on Allison’s face was all that she needed to see to continue on. She looked around and motioned for Allison to do the same. Let’s face it, it would add a certain ambiance to the pit arena. She walked over to an alcove in the wall, Allison trailing behind her and then looked back and forth between it and the maiden. Looks like it will fit in here.

I could store it here. Allison said she liked where Le’Andra was going with this. I wouldn’t have to worry about what to do with it, unless Xavier decided that he was done with Fight and wants to spend the rest of his life on one big adventure with you and Baby Lex.

Right? Allison couldn’t help but laugh at that one. Very first match with it here, someone’s getting thrown inside.

Already bad enough some people think there’s a hidden pit somewhere down here where we sacrifice wrestlers who come and ‘mysteriously’ come and go. Le’ snickered lightly then turned to Allison and smiled. Well, I do hate to cut this short, but I did promise Xavi’ I wouldn’t be long.

Why don’t I ride with you, just in case. They walked back over to the iron maiden and stopped in front of it.

Just in case what, Allison? Someone tries to hurt me? Really, Allison, no need. No one would dare lay a hand on me. Not even, Sahara, as much as she threatens to. Who would want to find out if there really is an underground pit, much less find themselves being the first person in it. She smiled sweetly. Do enjoy the rest of your day, Ms Preston.

You as well, Ms. Black. She watched for a moment as Le’Andra made her way over to the elevator. Le’? Le’Andra stopped and turned back around and looked at her. Keep givin’ him Hell.

Of course. She smiled, she didn’t have to hear Allison say her husband’s name to know that’s who she meant. It’s my favorite hobby.

Le’Andra turned back around and continued to the elevator as Allison turned her attention back to the iron maiden. For one brief moment, Allison imagined pushing Joe Montouri, tied up and fighting her, struggling against her with all his might as she pushed him towards it. Imagined pushing him inside and closing both of the doors on him; his screams of agony as the spikes pierced his flesh and internal organs. Wait… what… Allison shook that thought from her mind. Mindly amused with the thought and then thought that her uncle Brandon Moore might have been a little proud of that Murder Shed moment.

What the hell do you get a woman as a thank you for giving you an iron maiden? A woman who thinks… She paused for a moment. Or even might be Anne Boleyn?

She pulled her cell phone out and walked over to the elevator and while she waited she looked up Queen Anne Boleyn and did some reading. The elevator doors opened and she went inside and closed the doors. When they reopened in the lobby area, she had already decided. She would send some flowers, and not just any flower but a red rose which Allison had seen her holding in a picture from way back then. And it wouldn’t be a bouquet that would die, but a rose bush that would live as long as she took care of it. And it wouldn’t be just any old rose bush either because the roses of today weren’t around back then but she would send the French rose; red in color for beauty and courage. With that taken care of and out of the way, Allison made her way back home, hoping that the kids were still taking a nap so that way maybe she could squeeze in a little nap. 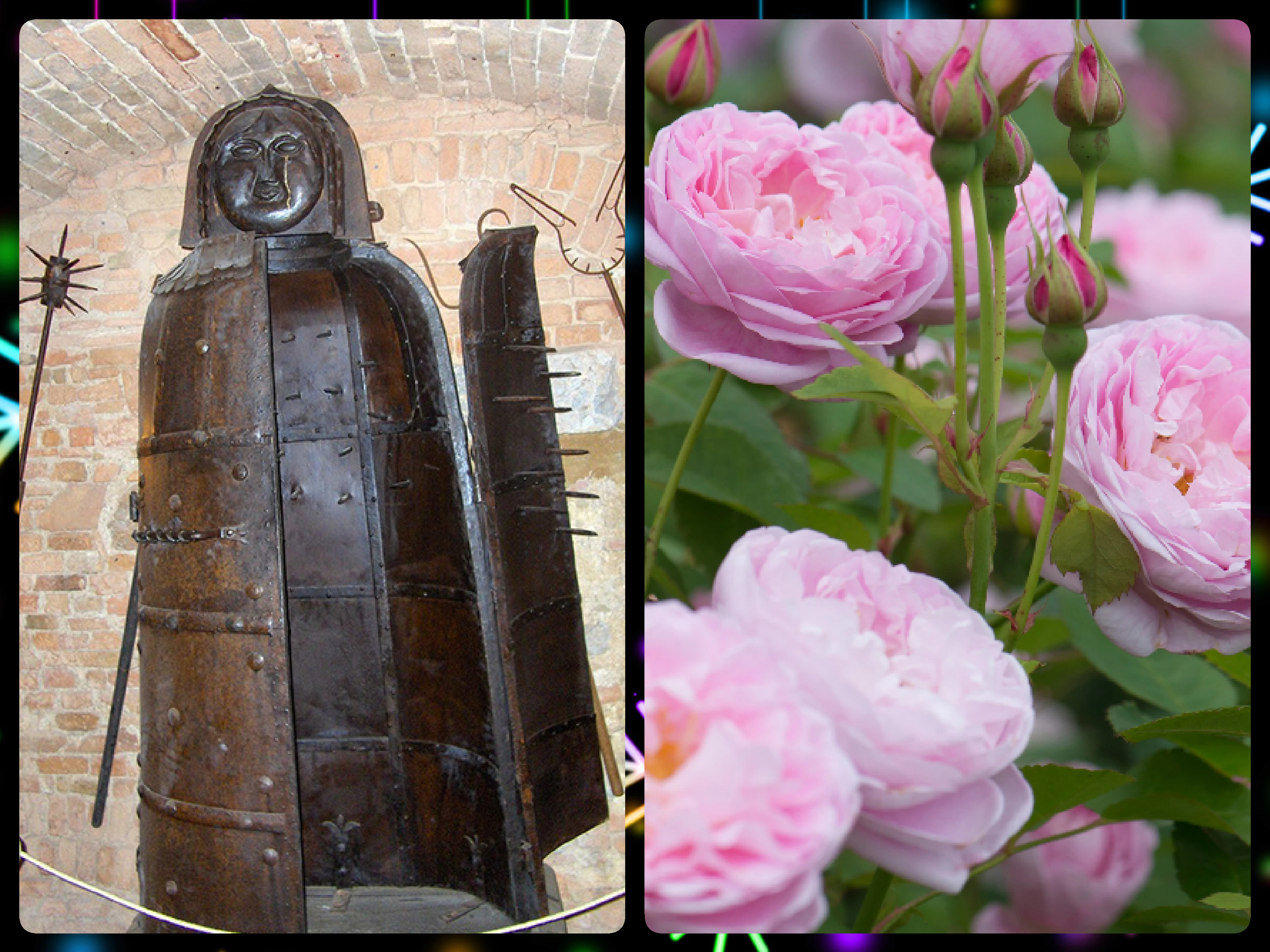