BeLIEve in the Cure II 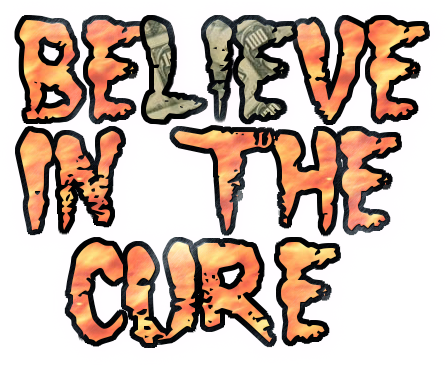 The battered looking Hearse was ancient, which was why Nocturnal loved it; he could probably afford something better with all the money the family had earned through the decades but why should they as this Hearse was as much as part of the family as any of his rag tag group of relatives. He had many vehicles in the lot out back of their compound from all the guests that had “Left” them their over the decades; the open windows were no help against the insane heat rising from the road after the sun had been scorching it all day long.

His second cousin Shadrach was probably thinking the same thing; his father Jebediah had died a few years back protecting Nocturnal’s adopted daughter Summer so Nocturnal had wanted to keep Shadrach and his twin around to help out the family business. He was driving with one hand on the wheel, glancing round all the time and chatting to everyone. His lank hair stuck to the side of his face and it was a surprise that the moron could actually legally drive but as they were travelling all around the States they needed not to have much trouble with the local police forces.

“So I know that with the demise of Outlaw Pro Wrestling we need to move on but why have we followed the directions on that letter posted under our locker room door? It’s not our fault this time that Johnny couldn’t keep it in his pants,” Nocturnal told Emily apologetically. Nocturnal’s sister was suffering worse than anyone from the heat, her face had come out in nasty red blotches and her eyes were glazed. Nocturnal was just hoping she was not going to be sick. “We need to sort stuff out especially after that match with Le’Andry last show turning out how it did but that Norwegian bitch will get what’s coming to her when she least expects it. Caleb’s not the monster that will take this lying down. Isn’t that right Caleb?”

Caleb grunted from where he was sitting.

“Uhhhh?” said Emily, with a feeble smile as she tried to cool herself down with one of those little hand fans but to no avail. The whole of the Koresh family had been travelling the day before to. New York was a long way to drive to from Abilene but Nocturnal had never liked to fly. The last show for Outlaw Pro Wrestling had been interesting last week but this weird little letter had been intriquing for the family. They had travelled back to Abilene and had discussed it over with the rest of the family and the decision had been made to see where the thing lead to and if they mysteriously disappeared the rest of the family would swarm across the country searching for them and that would be some kind of fucked up Hill Billy party.

It was funny really; Caleb should have beaten her easily in the match but she had cowardly tried to take him out with those acquaintances of hers. A few months back his critics were saying the Koresh Family could not hang any more in the wrestling industry; they had written off Nocturnal and the family for being past their prime but now they were reinvigorated. But after the last match their career in pro-wrestling was up in the air so this was the only thing for them to do. This time the Koresh Family would probably be worse of their kind as it will include some of the most aggressive combatants in the industry; plus Caleb was primed to bring the violence to the world.

Times had moved on since Caleb had made his wrestling debut in Outlaw Pro Wrestling and times had changed for the better for him; Caleb now being a former OPW Tag Champion and still wanted revenge for those that were in power within a professional wrestling company putting his family down for decades.

“This is a fucked up time,” said Shadrach. “We cannot continue to put some of these guys over by throwing our monster at them.”

From her seat in the front, Emily shot Nocturnal an anxious look. Then she looked at Shadrach disapprovingly. The imperturbable cousin of theirs almost choked on his cigarette. He breathed in and all the smoke drifting around inside the Hearse was drawn into his lungs. He flicked the butt out of the window.

“Close those goddamn windows,” demanded Nocturnal as he caressed the scar on his left cheek. “Cigarette smoke is not good for little Summer to breathe in.” He looked quite strange without his face paint on but he had to be in disguise as he went about his business in case he was stopped by someone; but saying that he was a six foot six monster with long hair driving across country in a hearse with a family of misfits. What is strange about that? Especially when they had crossed the country by vehicle as Nocturnal did not like to fly. Maybe next time he’d give himself some kind of sedative and sleep in the casket in the back; might get some piece and quiet.

A moment later it suddenly started getting cold. Abe was sat next to them strapped into a children’s child seat. The adult quadriplegic midget cousin of theirs was snoring his little head off. His mouth was filled with teeth that were filed sharp. Drool dripped down his chin staining his “FOCUS” t-shirt they had put on him. But at least they had covered him up for the journey. He started muttering something in his sleep.

“So this is going to be interesting to find out what this letter was about do you not think?” Nocturnal asked. “There are a lot of people that seemed to have lost their jobs because of Johnny for not being able to keep it in his underwear so I do wonder what they will all do next? Some of them I have crossed paths with whilst others are trying to make a name for themselves. I do sometimes feel as if I have a target on my forehead though; but enough about me we need to sort something else otherwise we’ll have to go to back to the family business fulltime.”

“As a family we need to find somewhere nearer to wherever we end up as all this fuckin’ commuting is become a drag,” said Shadrach. “Just by being in the same ring as this family and freakin’ wrestling company will get that superstar rub. Some people have even said that a lot of these companies out there are like watered companies that need a touch of Koresh.”

Nocturnal played with the hair that hung across his face as he looked at his adopted daughter Summer, fast asleep on the seat next to him. “We will need to put a plan together if we’re going to continue in this business; especially with the Cure so I need all of you to put out your feelers to see what is happening with the rest of the former OPW roster even if most of them are as dull as goddamn dish water.”

“Oh I know who you mean,” Emily smiled as she turned to her big brother, “Who would have thought you would be going into another week without a confirmed company to work for but we always bounce back.”

“True Emily,” Nocturnal said. “Most companies are a flash in a pan. I was doing this sort of thing when most of these companies owners were but a flicker in some pool boy’s pecker on the housing projects. Most of the suits in their front offices have tried to hand me a list of rules and regulations but meh! Yeah, a Koresh with rules? Fuck them, fuck them all. I ripped the rule book up in their faces and stuffed the ripped up paper down their throats.”

“We have always been underestimated Alex,” said Emily to her brother. “Some are even saying that we’re a part of what was wrong with this industry as we’re just copies of a character that would do well in this sport; they say that we portray these characters as actors would do in a movie and that the sport has moved on to people like Xavier Black, Stephen Stratford, Rob Riot or even Frank Windsor as they actually wrestle first.”

Nocturnal sadistically smiled as he looked out the window as they travelled across country. He did not like to fly and only travelled on planes when necessary. He did not know why he had this phobia but it was a bitch when he had to travel all around the world wrestling for a living.

“I know sis but I am Nocturnal,” he said. “I am the Sadistic Bastard…….Well you know the rest. This Family will need something to distract us from going back to the family business and what they fail to realise is what you see on the screen is what we are like in real life. It is going to be a fun time seeing what we do next.”

Emily laughed for a few seconds before straightening her face, “I have been watching some of the stuff from our old matches. We actually have fought the best over the years. It has been fun so even if nothing comes after OPW we will be alright.”

Nocturnal chuckled, “Really? Did you watch many of them? Remember when we were feuding with the cRu? They may be talented in whatever Indie promotion that they are in these days but could they make it in somewhere like Outlaw Pro Wrestling or whichever big company we go to now? No. They would be opening the show there as some kind of gimmick act if they are lucky but if they are unlucky they would be working on the concession or setting up the ring. Depends if they are either willing to step up or just suck the bosses shrivelled dick like a lot of those other bitches in OPW did. I remember cRu from my days when I walked into his their little promotion NEW and destroyed them after the imploded.”

Summer moved in the seat next to Nocturnal. She stretched.

“But are they going to be harder to beat that Focus or any of those other groups in OPW?” Shadrach asked. “There is more to them to start with. I do not trust them. I would not put it past them to join together just to eliminate the Cure from this industry. Could you beat them if they did?”

Nocturnal laughed, “I would want them too. They can play their games but none of them are as good at this as we are. Let them walk a mile in my boots and they will see what it is like to be a professional wrestler with dark tendencies. I am the fucking Innovator of Darkness, the Sadistic Bastard, the Dark Icon………” He paused as he heard Abe moving in the chair next to him.

“We are here Alex,” Shadrach said.

“Okay,” Nocturnal said as he caressed the casket in the back. “Shad, remember to bring her.”

They pulled up and got out of the Hearse and all started looking at some city skyline. Having wrestled many times in this city that had a affection for wrestling it was the perfect second home for the Sadistic Bastard and his family. Emily opened the door and there was a man stood there. He was a typical suit; a square in a cheap suit with a nervous look upon his face.